That one day every week that is just blech. Sometimes moreso than other times, but still it seems to be that same day.

Of course, a lot of people will claim “MONDAY! ALWAYS MONDAY!” 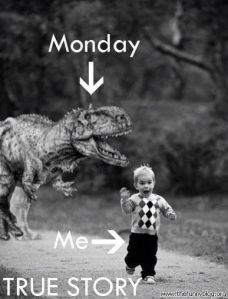 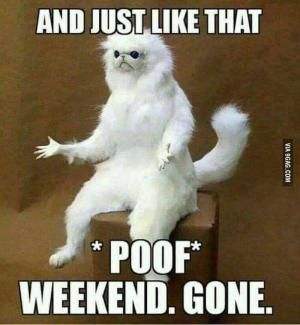 Personally, it’s Tuesdays that always get me. 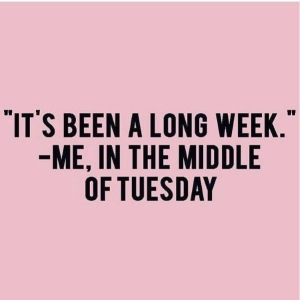 My Husband said it’s Wednesday for him. Stuck in the middle – too late in the week to start a big project, but not close enough to the weekend.

For My Child, it seems to be Thursdays. While she most likely wouldn’t be able to vocalize or even identify what I’m talking about, but from the outside looking in, this seems to be HER day.

She’s tired and exhausted from the three previous days of school and friends and everything and Thursday morning comes around HARD.

Take a recent Thursday, for example:

I overslept. Which meant I was running late all morning.

So, I woke her up late, BUT we still needed to get out of the house quickly, so I had to rush her through her routine. She is very good about getting up in the morning, she doesn’t often sleep in, but Thursdays are the day she struggles. On a normal Thursday morning I would have gently woken her up on time, casually chatted with her a bit while she was still waking up, helped her pick out clothes, and so on.

Not this morning. Rush and flurry and trying-not-to-raise-my-voice. Out the door. Starbucks screws up your order after they takefiveextraminutesforabsolutelynoreason. Traffic is rough, because you left your house 20 minutes later than usual. Rush to school drop off. It’s in a different room this time because, AGAIN, you are later than usual. Give hugs, say goodbye, last wave, and out the door. Check the classroom video monitors on your way out the door and STOP!

Knife in my heart.

It was all just too much for my usually easy-going child. Her routine was SO off she just couldn’t handle it all.

I stopped everything, took a breath, and walked right back into my room. Nothing else mattered at that moment.

I hugged her. I held her. I let her get the sobs out.

With no rushing and no hurrying, we talked, and we did PROPER goodbyes. Yes, it’s an extra process, but does it really matter that it takes an extra 10 seconds. No.

My day continued to suck – there’s no other way to put it. I am against several deadlines again, I have to be a contributing member of my team, I had a two-hour-long-somewhat-pointless meeting. I had to stay 30 minutes later than usual to finish up a project, which resulted in even more fun traffic. I call My Husband on the way to let him know that I HAVE left work and he tells me that the A/C is not working correctly. Again. NOT okay in the South. By the time I pull into our driveway, our smoke alarms are going off, my dogs are freaking out, and My Husband isn’t doing much better. Luckily, My Child is at the neighbor’s house playing with her new best friend and having dinner.

My Husband (temporarily) pulls the batteries out of the smoke detectors, I explain that they go off when they are too hot (not only when they sense smoke), the guy comes and fixes the A/C, the dogs calm and cool down, I get dinner from Chick-fil-A, and My Child comes home to relative calm.

That night we read a couple of chapters in the book we are reading together and just cuddle. That’s something we do not do as often as we should. But, when I ask her how her day was, she tells me how much fun she had and the projects she did at school.

I love when a five-year-old can put things in perspective for me.

While there might have been rough patches along the way, the good still outweighed the bad.

So, no matter what YOUR day is….

Categories: This and That

This site uses Akismet to reduce spam. Learn how your comment data is processed.