Last week I decided to join in on #the100dayproject and tackle my To Be Read (TBR) pile. I know mine is definitely not the most out of control pile around, but it does give me some anxiety that I am missing out on all of these words I really want to read.

So, without any further ado, here is my list. 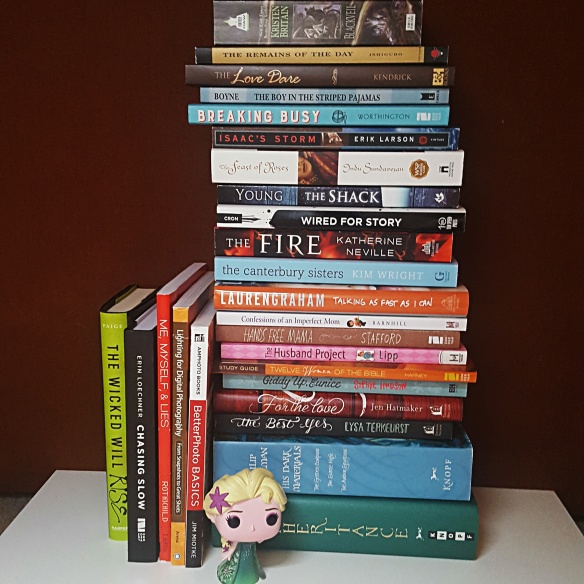 Top down of the horizontal stack:

The Remains of the Day by Kazuo Ishiguro

The Love Dare by Alex Kendrick and Stephen Kendrick

The Shack by William P. Young (I need to read before I see the movie)

Wired for Story by Lisa Cron

The Canterbury Sisters by Kim Wright

Talking as Fast as I Can by Lauren Graham

Confessions of an Imperfect Mom by Julie Ann Barnhill

The Husband Project by Kathi Lipp

Giddy Up, Eunice by Sophie Hudson

For the Love by Jen Hatmaker

The Best Yes by Lysa Terkeurst

His Dark Materials by Philip Pullman

Left to right of the vertical stack:

Me, Myself, & Lies by Jennifer Rothschild

Two that were forgotten for this photo:

The Zookeeper’s Wife by Diane Ackerman

**Please note these are affiliate links.

9 thoughts on “My TBR Pile”

This site uses Akismet to reduce spam. Learn how your comment data is processed.